The Differences Between Indoor Navigation Systems 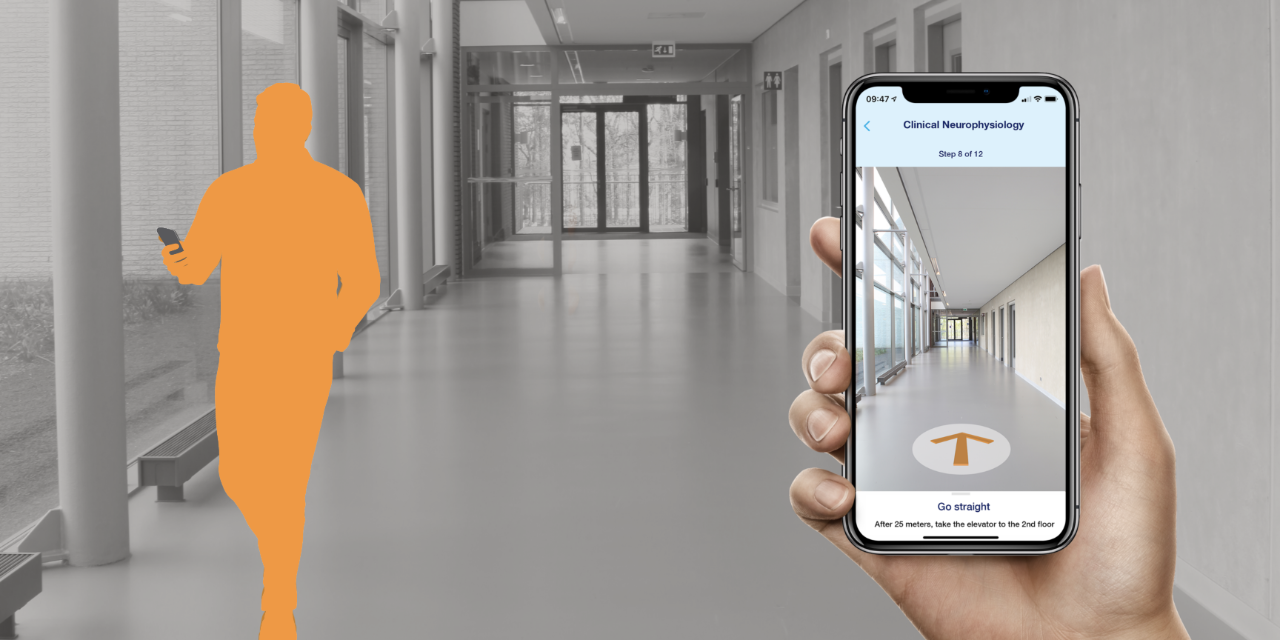 Many of us remember the days when we’d study our Rand-McNally road atlas or our AAA TripTik in advance of our Clark Griswold-esque family vacation.  Learning how to read a map was a rite of passage, much like learning to drive a stick or changing your own flat tire.

It’s truly remarkable that an entire generation of adult drivers has never been concerned with “map prep” prior to setting course to an unfamiliar driving destination.  In-dash navigation systems, Google Maps, and Waze have revolutionized the way we get around.  We don’t think much about how it works, we’re just grateful for the huge improvement over printing out maps, following road signs, tracking mile markers, or, heaven forbid, pulling over and asking a human for directions.  The technology behind GPS-based navigation systems really is a feat of great human ingenuity.  Mathematical graphing algorithms consider all the possible routes, optimize based on shortest distance, lack of tolls or traffic, then hand-off to micro-receivers to process location, velocity, and time from special satellite signals.  Add a dash of calculus and voila, instant navigation.  We’re not so much following a map as we are playing a video game.

As we consider the application of this new navigation paradigm to solve a different challenge – finding our way as we walk inside large complex buildings – we are quickly reminded that the real feat of Google Maps isn’t so much the gee whiz tech that makes it all possible but the simplicity and clarity with which Google communicates directions in cadence with the movement of the “blue-dot” on our navigation screen.  However, when we try to apply this blue-dot concept to pedestrian indoor navigation, we realize the cool tech that works wonderfully for navigating in open space while moving at 60 miles per hour may not serve us as well in confined spaces at low speed where our view of the navigation landscape is obstructed by walls and ceilings.

The Problems with Blue-dot Indoor Navigation

Replicating blue-dot driving navigation to solve for challenges encountered with pedestrian indoor wayfinding amounts to fitting the proverbial square peg of continuous, fast, and fluid movement into the round hole of slow walking with lots of stopping and starting.  Recall the time in your car when you were stopped or barely moving and Google Maps had no idea which direction you were pointed?  Depending on your sense of direction you may have started left only to quickly realize you should have turned right.  While this type of interaction is the exception with driving navigation, it is unfortunately the rule with pedestrian indoor blue-dot navigation.

While blue-dot map-based navigation may be the most well-known type of indoor mobile wayfinding, it is most certainly not the most effective.  It works by representing the user as a moving blue-dot on the “plan view” of a blueprint-like image of the facility (as if looking down from the ceiling).  Movement is achieved through the smartphone’s Bluetooth connection with hundreds of battery-powered low-energy Bluetooth beacons installed throughout the building.  Beacons serve an analogous function to GPS satellites for driving navigation insomuch as they determine user position.  Unfortunately, it seems as though beacons have become a solution looking for a problem.  Beacon manufacturers and their app-building partners push the promise of mobile wayfinding based on indoor positioning as a way to expand the market for such devices.  We should all be wary of circumstances where the widget or invention drives the user experience.  If all you have is a hammer, every problem looks like a nail.

Not surprisingly, the usability of blue-dot beacon-based apps is questionable due to the dreadful infinite loop of beacon latency, indecisive user movement, irregular location accuracy, and confounded by the user’s overtaxed cognition as they attempt to interpret the map in the midst of an increasingly stressful situation.  Users often start out walking only to realize they’ve taken many steps in the wrong direction by the time the beacon finally catches up with their current location.  Indoor maps, typically resembling blueprints (i.e. an imperfect abstraction of the physical space), require more brain power to follow and the low speed with which the user moves can make the system feel choppy and discrete rather than continuous and smooth as it seems when driving.  In his academic research, spatial cognitive scientist Dr. Christoph Holscher remarked, “many people have difficulties interpreting maps and other abstract visualizations of space. Research acknowledges that indoor maps are a compromised interface for people finding their way in complex environments.”

While map-based techniques for communicating directions don’t necessarily translate from driving outdoors to walking indoors, we mustn’t throw the baby out with the bathwater.  The hallways and points of interest in complex buildings like hospitals can still be modeled with graph theory.  Optimal pathways can certainly be dynamically generated based on important criteria such shortest distance, the need for elevators, etc.  What we need is a better and clearer method for communicating the algorithm’s optimal pathway to the user.  We need a method that converges with users’ natural way of thinking and effectively accommodates indoor nuance such as split-levels and mezzanines without confusing or frustrating the user.

Thankfully, the scientific community has produced a stable of research regarding how humans think when it comes to matters of spatial awareness.  Their key takeaway is our need for visual landmarks.  Academics unanimously conclude that visual landmarks are the most efficient way to communicate wayfinding instructions, especially in circumstances such as hospital navigation where anxiety is high and cognitive capacity compromised.  Landmarks allow for fast reasoning because they align with humans’ natural cognitive navigation process.  So, how do we incorporate visual landmarks into a mobile wayfinding application?  Simple…we use pictures!

Photo Landmark Navigation is a more effective technique for indoor mobile wayfinding.  Like GPS or blue-dot navigation, it leverages graphing algorithms to generate optimized pathways from one point of interest to the next (e.g. main entrance to fourth floor surgery unit).  But instead of representing the user as a moving blue-dot on a map, the user is presented a narrative sequence of photographs of building hallways rich with visual landmarks and augmented with textual instructions, distances, and universally accepted wayfinding icons that represent arrows, elevators, stairs, escalators, etc.  As users reach each new visual landmark, they simply swipe to the next picture, revealing the next set of landmarks to walk toward. 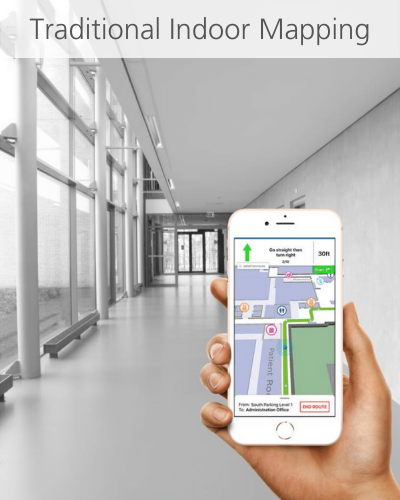 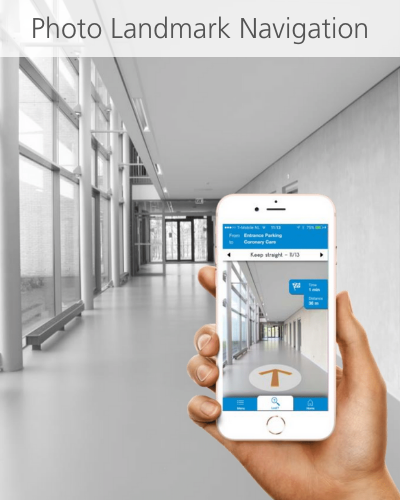 When it comes to choosing the best possible digital wayfinding solution, it's important to keep in mind how accessibility and usability play into the user experience. The elegance of photo landmark navigation isn’t limited to superior usability.  Photos obviate the need for indoor positioning, thereby removing the need for beacons which are expensive to install and maintain.  And, while photo landmark navigation can be deployed in a native smartphone app, it doesn’t have to be.  Unlike blue-dot solutions which must be deployed in a native app because of their dependency on Bluetooth, photo landmark navigation can be deployed in a browser and initiated by QR codes or URLs delivered in email, text messages or via kiosks.  The opportunities afforded by offering an app-less mobile wayfinding solution dramatically increase the likelihood of usage and adoption.  Instead of only appealing to those users who have taken the time to download your app (likely a tiny percentage of all visitors), you can now offer mobile wayfinding to any visitor with a smartphone!

Be sure to check out 5 other benefits to using digital wayfinding in your health system.

Thanks for contacting us! An Eyedog.US representative will reply to your inquiry shortly!

Thank you for your interest in Eyedog.US. We look forward to meeting you and sharing the power of Eyedog wayfinding technology. A representative will contact you shortly to schedule a demo.